About a week ago I needed something to make me happy after a dentist appointment because dentist appointments are the worst, so I decided to go for a hike. Tired of Roob-sing it 5 out of the 7 days of the week due to the stupid time change making it all dark and murder-y on other trails, I decided to investigate other options close to home and found Doty Trust Park, which features over 100 miles of trails (I actually can’t find anything that backs up the 100 miles worth of trails part, I just happened to run into a person who I follow on IG while I was coming down who told me that)!

This blog write up will focus on getting to the Crestlawn Memorial, which is a Flag and a Cross located several peaks over from here you start. The first day I went it was near sunset and since I didn’t know the trail, I did not finish the trek entirely because I did not want to die and have the headline be “Avid Hiker Gets Lost in Hills; Dies From Being Eaten by her Own Dog.” I went back the following Saturday when there was a break in the rain.

The trail starts off at the park. You’ll see a fenced trail on the west side of the park. Follow that rail until you see a break in the fence to a hill that climbs pretty steeply

This part is like, steep, y’all. But it will be the most difficult part of the trek, so just get up there and stop your complaining already.

From the top of the hill it’s a hiker’s delight as you can see tons of trails for exploring the numerous rolling hills in the area, and you can even get to the Great Norco Pumpkin from here which makes for a more exciting trek than the one people usually take.

From here, you’ll descend a bit as you head toward an old telephone poll that looks like a cross (that’s not the cross you’re looking for) and over to a flat top hill area that I named “Flat Top Hill Area”

As you get to Flat Top Hill Area, you’ll see there’s a trail that goes over the hill, and one that goes around it. I suggest you take the one to the right that goes around it, unless you want to be like me and go over it and then have to go down a super sketch trail that isn’t a trail and have your dog jump ahead of you, jerk back because you’re not as fast as she is and she’s attached to you, and have her look at you in confusion and anger, repeatedly, because she doesn’t understand how leashes work.

If you take the trail to the right, you’ll come out in the same area. Here you will see a few more hills. 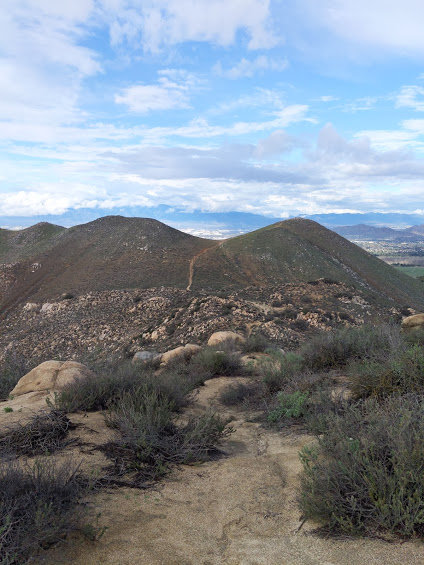 Follow that trail up to the middle and go to the left. Here you will skirt around the hill and see the ugly, industrial part of Ontario, but also Baldy in the distance, so it’s got that going for it.

Finally, as you skirt around this hill you’ll see the memorial in the distance. 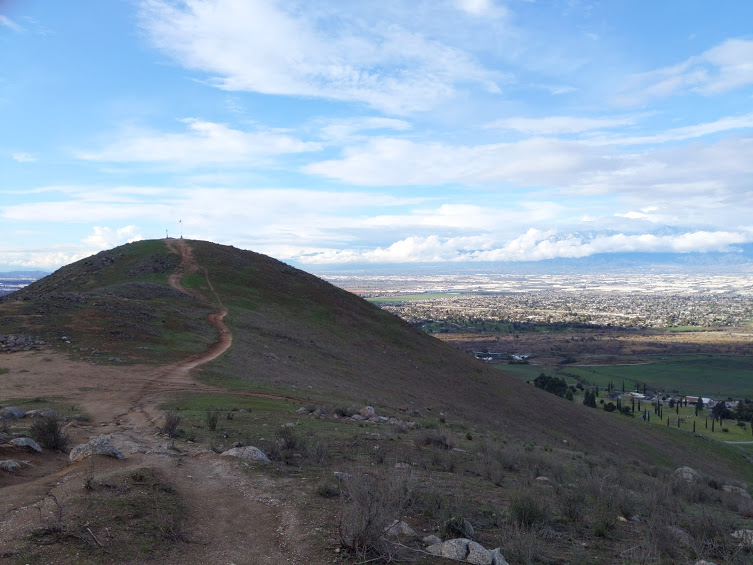 Keep on climbing, and you’ve made it!

From here you have spectacular 360 views where you can see Baldy, Wilson (boooooo), San J., San G., and San B. Additionally, you can read the memorials someone painted on the rocks. 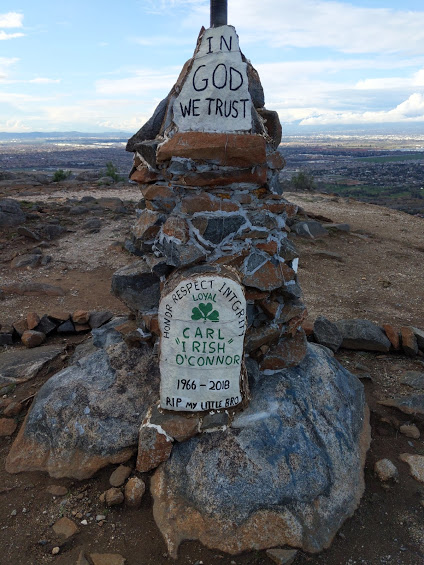 Once you’re done here, head back from whence you came. Because there are so many trails meandering in and out of the area, be sure you keep an eye on where you’re going. I got side tracked and almost ended up in Norco.

Also if you don’t want to go back down that steep hill at the beginning, you can descend to the left at the part after Flat Top Hill Area. 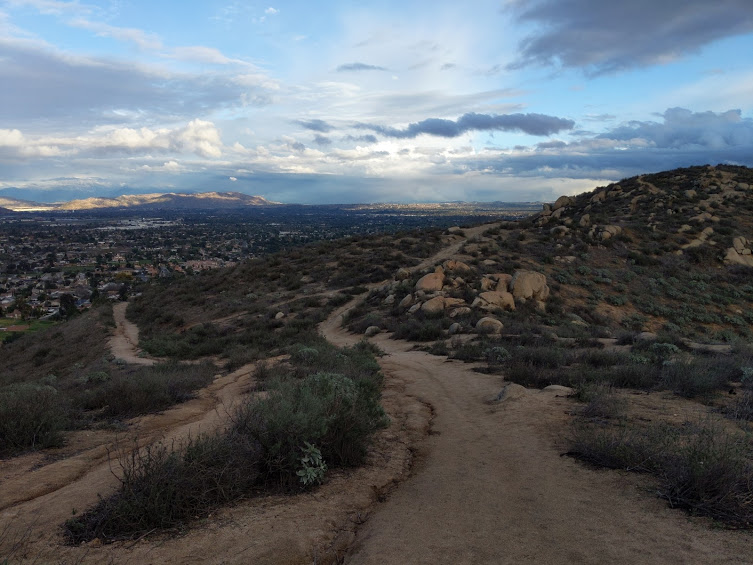 This will skirt along the side of the hill and as long as you keep going down, you’ll be spit out on a paved road that leads you right back to the park.

This trail system is just as close to my house as Rubidoux is and is much more interesting, although I still would not roam around there in the dark. I also recommend doing this trail in the Fall/Winter/Spring because it’s super exposed. Both sunsets I caught there were spectacular. It’d also make a great Sunrise hike for those weirdos who like to get up early.

Also here’s a picture of Smalls because I can. 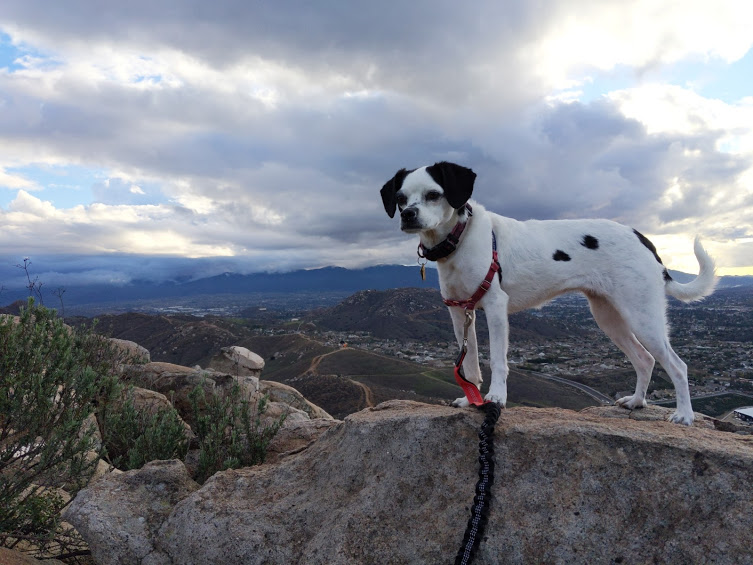