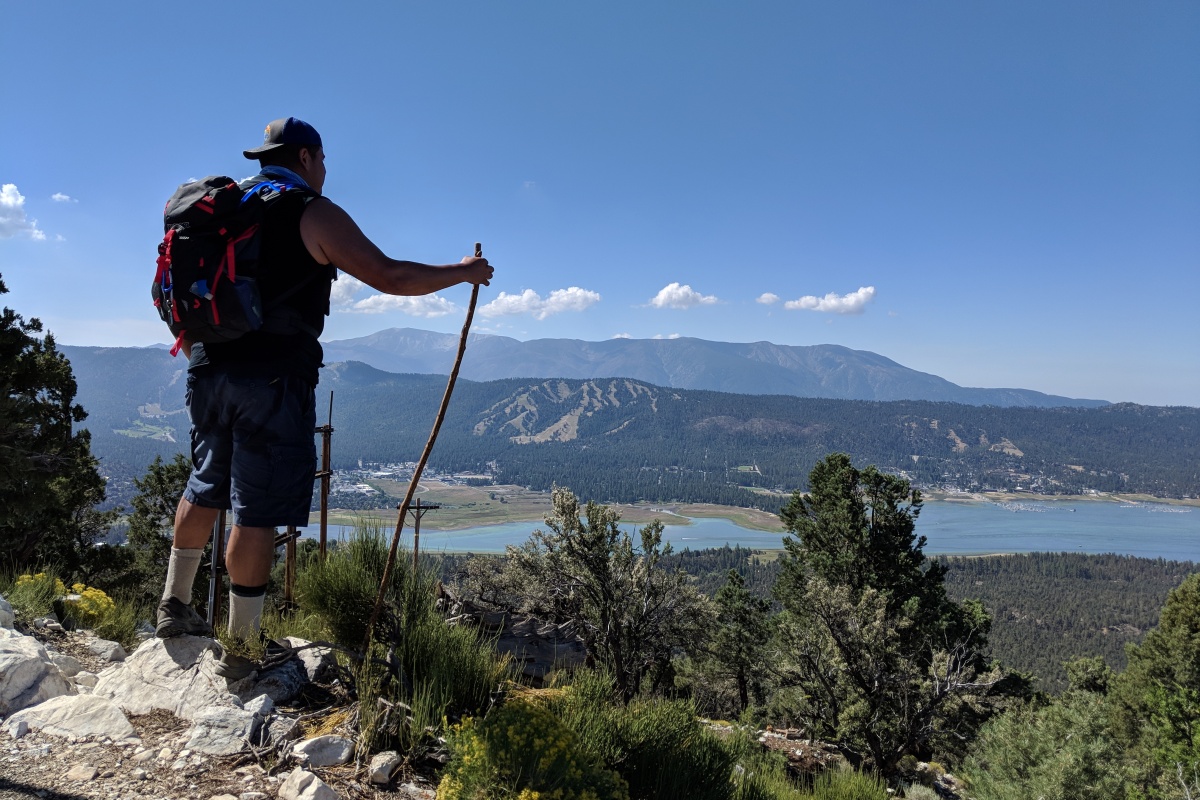 Last Saturday @ill_profe and I had planned to hike Sugar Loaf in Big Bear but there was some event going on where cars were lined up the streets and bouncy houses were at the trailhead and we were like, yeaaaaahhhhh passssss.

Since we’d made the drive out I racked my brain for an alternate and came up with the very memorable name of Bertha Peak, named after Phineaus H. Bertha, discoverer of mumus.

Bertha Peak starts from the Cougar Crest trailhead. When you come to the fork in the road, continue to the left.

You will begin to meander through a forest that is rather fairy tale like.

You’ll climb steadily, but gently, and if you get tired there’s like 1,000 benches for you to sit on and enjoy the views. 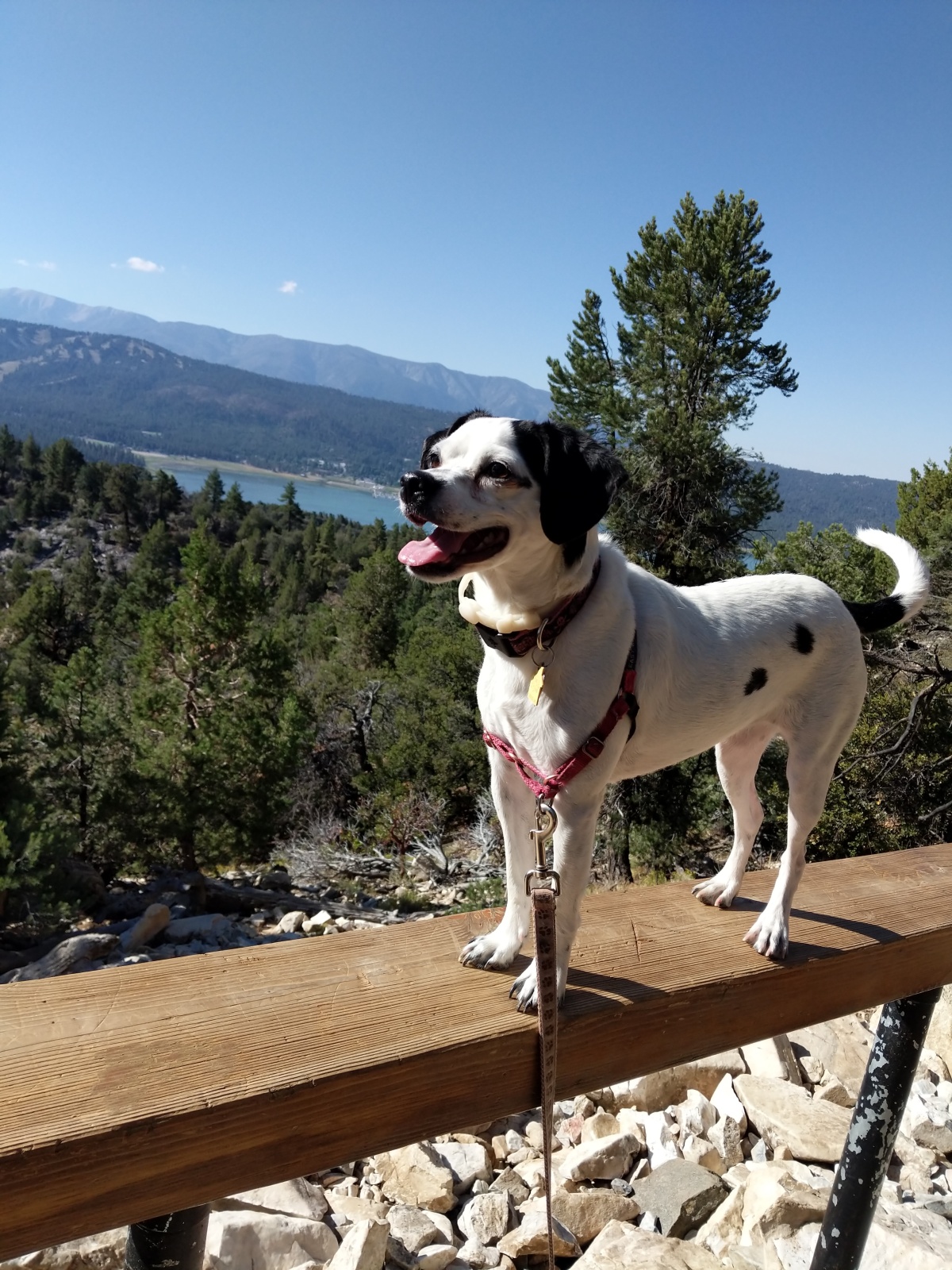 Seriously, guys. I’ve never seen so many benches on a trail. Benches to the left of you, benches to the right of you. There was a sale on benches and EVERYONE GETS A BENCH!

Also, on the way up we saw a bunch of cairns which we kicked down while shouting “LEAVE NO TRAAAAAAACCEEE.”

Look, I’m a big fan of cairns when they’re marking a trail (sorry Sierra Club) but when they’re just hanging out there because someone was bored and serve no purpose I kick ’em down so they don’t contribute to soil erosion and encourage others to leave stuff they shouldn’t. You may find this overkill and say “Oh, come on Kristin, you’re just being a prude, let people have their dumb rock stacks” to which I say ::insert emoji shrug::

Anyway, there’s not a lot of opportunity to get lost on this trail so just keep on heading up. At some point you’ll see some towers in the distance, and that’s Bertha peak. You’ll come to a juncture where the PCT splits off but there’s a sign letting you know Bertha is a-that-away (right… it’s to the right. Go to the right, because that’s where it is.)

This is where this fairly gentle trail starts getting real. It becomes a fire road but a fairly steep fire road. I mean, not like Cactus to Clouds steep, but steep enough to where you go “Boy howdy, this is kinda steep.”

Annnnyway, at one point on the fire road, you’ll see a track off to the right. You can take that up if you want a slightly more strenuous trek, or just stay on the fire road. Eventually you’ll make it to the top for some amazing views of the lake

There are also some buildings up there you can walk around for alternate views of the area. You might also find a guy up there stacking rocks out of boredom and think “when he leaves Imma kick those suckers down.”

Or maybe that’s just me.

When you’re done, go back the way you came.

All in all Bertha Peak was a great backup to the trail we were originally planning on doing. I especially recommend it as an introduction to elevation training.

The trailhead here goes right off the highway, right between two blind curves so have fun crossing that road.

Follow the trail up and you’ll end up on the right side of Castle Rock when you’ll see a split in the trail. Take the trail to the left at the split if you want to head to Bluff Lake, unlike what we did, which was go to the right and end up in a wash somewhere.

This was played off as an “accident” but I’m pretty sure the person I was with was checking out good locations to store a body.

We ended up backtracking and, yet again took a wrong trail (my pick this time) which ended up in us off roading until we got to the fire road. We meandered along that for a bit until we got to a fork, and made a left towards a locked gate and the ruins of a cabin that said “Private Property.”

From Alltrails: Be sure before crossing into Bluff Lake Preserve you contact and get permission from The Wildlands Conservancy (909) 797-8507, there are rare plants and meadows here, be careful where you tread.

I’m not going to lie to you, we 100% did not get permission to go on the property (and didn’t realize we were supposed to). We crossed over some greenery to a rock that overlooked the lake. A very nice volunteer ranger politely told us we were in a restricted area, asked that we stay on the trails, and didn’t yell at us for being the bumbling, habitat-destroying jerks we were. He didn’t even kick us off the preserve and instead suggested to check out the Lodge Pine, which is a 450 year old tree that is over 100 feet tall (rare for that type of tree), and the amphitheater built by the YMCA that had a very bayou vibe.

Bluff Lake is a very cool place with lots of interesting flowers (the ranger told us they change by the week) and rock formations. It’s well worth the visit.

From here, we back tracked and ended up on the correct trail. We made our way up Castle Rock, which required a bit of climbing, but has a great view of Big Bear Lake: 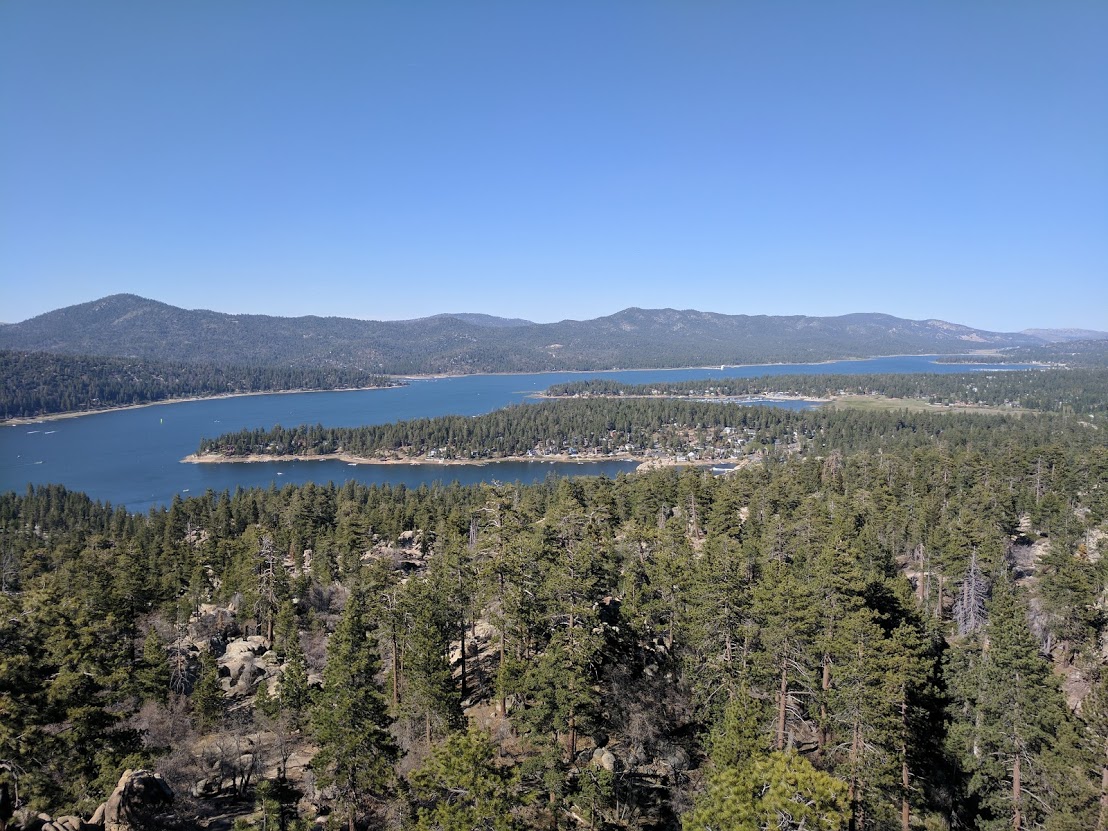 While there is some elevation gain on this trail (and even more if you go the wrong way and have to climb back up), this is a fairly easy trek that has a lot of payoff. I’d recommend planning for a half day trip here. Castle Rock is a great place for a lunch or early dinner with a great view.

Learn more about Bluff Lake at the Wildlands Conservancy page.