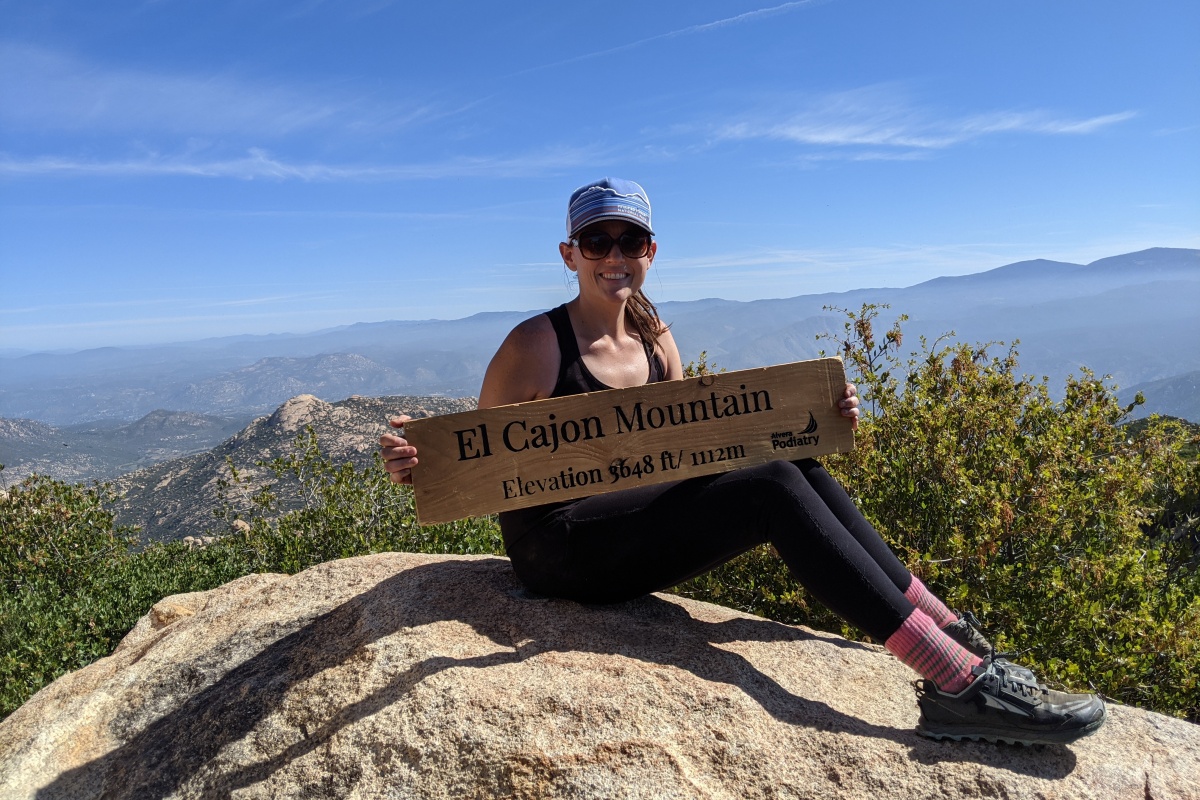 When you run into a random, lost trail runner who asks “Excuse me, do you know what all this craziness is?” you realize you may have made a mistake.

I’d done El Cajon via the normal route last year, in July, in the heat, which resulted in all of us running out of water and Homie having to literally pour sweat out of his shoes, so when I opted to complete the San Diego Six Pack of Peaks challenge again, I was desperate to find another route that didn’t involve going up hill both ways.

And boy did I find one.

South Ridge to El Cajon requires navigation and class 3 scrambling and some areas where you honestly should have a rope to get up. Like seriously, we saw climbing clips bolted into the rocks. But there we were, rope-less and nowhere to go but up or down.

We started around 6:15 a.m. but I wish we’d started earlier because the heat did get to us, although we were treated to the sunrise even at that time.

The first and last part of the trail are both actual trails with actual maps but the middle part (the difficult part) is not. We wouldn’t have gotten there without the map so I highly recommend downloading it off  Alltrails if you try to take this route because it is not at all intuitive.

The trail starts off the highway, not at a school parking lot like Alltrails makes you think. If you go to the coordinates provided by AT, there’s a turn out you can park at. The beginning of the trail has a board that goes over a dry stream.

This part of the trail is fairly obvious. You’ll take a small path and end up a wider trail and you’ll make a left. About a mile in (total) you’ll make a right turn up a pretty steep hill (keep your eye on the map, we missed it the first time) and that’s where the craziness begins. It just gets steeper and steeper the more you go up.

There are several trails that go in and out but try to look for the black dots painted on the rocks to get to the route. Somewhere along the way the dots disappear which is incredibly helpful… but as long as you continue going up to the top of the plateau you will get there.

Once you get to the top of the plateau there is another official trail so use your Alltrails map to get you to it if you don’t see it immediately. We had trouble locating this trail as well, but at least we weren’t trying to cling to the side of the mountain while trying to do so.

You’ll then take that trail until you join the official “other” trail at the base of El Cajon/El Capitan. This part of the trail is well marked. Too well marked, if you ask me.

After you take your obligatory summit pic, it’s time to head back down. This is where you realize you’re in for the same treat, but in reverse.

This brings me to an important point. I want to stress that this route is NOT for inexperienced climbers. If you don’t have a ton of experience you have no business being on this trail and should just go to the up hill both ways suffer-fest of the normal route.

There is one section in particular that is pretty tough to pass both coming and going, but going.. my God, going was so much worse. It’s a decent drop to a somewhat small ledge and was super scary coming down. You kinda just have to feel around with your feet and hope your shoes hold on as you shimmy them down the wall and land in a leap of faith on a narrow bit of rock.

Everyone knows I’m a big exaggerator for comedic effect, but I’m pretty confident in my hiking skills and this threw me for a loop. When Sharee said she felt nervous and that I seemed way more sure of myself I knew there was a huge problem because I was pretty much screaming in terror inside. Definitely not a trail you want to do on your own.

(Also, on the way out we passed an extremely large group of people who had taken the same route and included their small children, one of which was tied at the waist by a rope!?!? I had many questions for them. For starters: why? And how? And also why and how?)

As you finally get out of the steep section of the trail and onto the real trail again, keep your eye on the map, as in our bliss of being alive, we again, missed our turn off to get to the car.

Also, on the way back down we saw a sign that said the trail we were using was closed. They don’t have *anything* at the start of the trail, though, and we had to make it back to the car, so we took the trail back down, panicked because neither Sharee nor I are rule breakers.

Because of the terrain, I recommend wearing sturdy shoes. I usually wear trail runners and they were demolished, so actual hiking boots would be better.

I also recommend having gloves to help with grip to help you feel more secure. My hands were TORN UP after this and my arms still hurt three days later because I have the upper body strength of a toddler.

There is a lot of climbing on this trail, so if you are afraid of heights, this is a no go.

And finally, even with the insanity I prefer this over the other route but you NEED to have a good deal of navigation and technical experience.

Did you hear me? FOR EXPERIENCED HIKERS ONLY. Mom is being serious here. Don’t make me come over there!