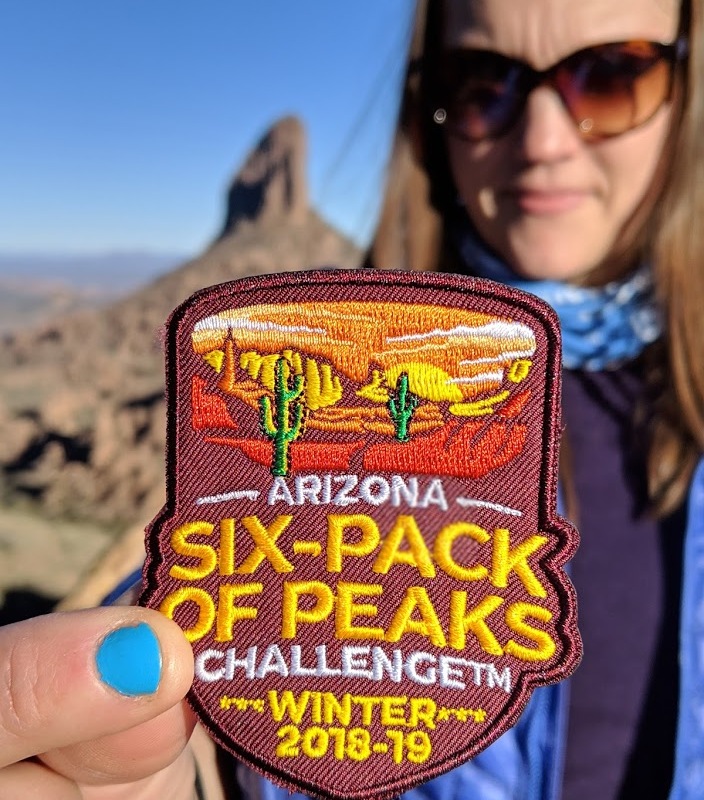 So, as I’ve mentioned I’m an ambassador for the Six Pack of Peaks, a hiking challenge created by Jeff from Social Hiker. The challenge started with six progressively higher peaks in Southern California and has grown to include multiple regions throughout the US because apparently, Jeff doesn’t want me doing anything but hiking as I try to complete each challenge.

This year Jeff added a “winter series” based out of Arizona. This series, created by Richard Oppelaar a.k.a. FoxTrax on Instagram, is a series of  hikes make you want to die in a different way than the Socal Six Pack in that they are short but so steep you feel like you’re perpetually on a stair master.

I had a few days off around the holidays and I asked Richard if he thought this was possible to do in three days. He suggested a plan (he was probably laughing manically while doing so) and I suckered… I mean invited my friend Sheri (a.k.a. Wheelzabub, the talented artist behind the ye olde Hike Inland Empire logo) to join me in my quest to complete the series. She texted back, and I quote “it looks like fun.”

LOL, what fools we were.

Below is the the itinerary of the trip we took. Richard did an excellent job on the trail guides for the main Six Pack of Peaks site and I’m super lazy, so rather than writing my own versions, I’ve linked his posts below. I have added a few tips and commentary to let you know the real deal about what to expect.

Three day plan: So the first piece of advice I will give you if you’re looking at doing this in three days is: DON’T.

Do it in four days, guys. Seriously. You should do it in four days. Don’t drive 5.5 hours back after doing Flat iron. Stay another night. Have some beers at Four Peaks. Get a good night’s sleep so you’re not dozing off while driving home and you have to pry your eyes open Clockwork Orange style.

Do it in four days.

Timing: Now that I still haven’t talked you out of doing it in three days, my next word of advice is that it’s going to take you longer than you think it is. You’re going to be looking at a 6 mile hike and think “Yeah so that’ll be three hours.” But it’s not going to be. It’s going to be 4.5-5 hours. Because these trails are difficult.

Lodging: Don’t ask me about where to camp. Because we, my friends, stayed in hotels. Hotels with marginally comfy beds and showers. Did it cost more? Yes. But for $90 each for two nights WE LIVED LIKE KINGS!

Temperature: Newsflash: the desert is cold in the winter. It never got over 50 degrees, and most mornings it was in the 20’s. IT WAS COLD, Y’ALL. Bring layers.

Okay,  now that those items are covered, onto the schedule. This is based out of my condo in Riverside, so don’t be mad at me if you live in San Diego and it takes you longer to get there because contrary to what you might think, I don’t know where every single one of you lives. 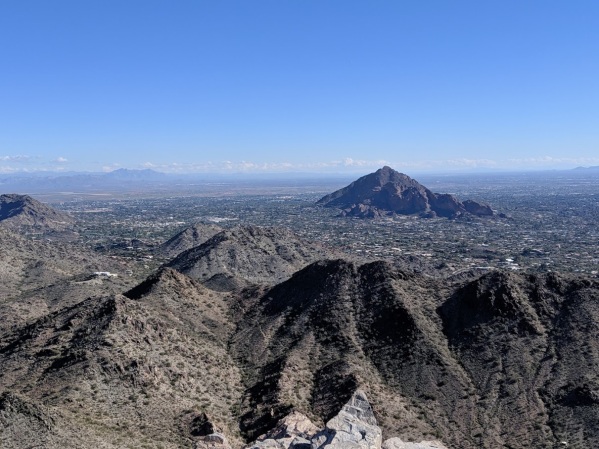 This was one of my least favorite of the peaks. It was super crowded and I felt like I was a Hollywood wannabe startlet looking to get discovered while hiking (that’s a Runyon Canyon joke, people).

The parking for this one is fairly challenging if you get there later in the day. As we made our way down the road we began to see a long line of cars parked on the side, which is never a good sign. Luckily we sharked the small parking area for awhile and we snagged a spot.

Fun tip: the trail head is on the left, just after the gate next to the parking lot. It was also under mega construction so a lot of it was fenced off. 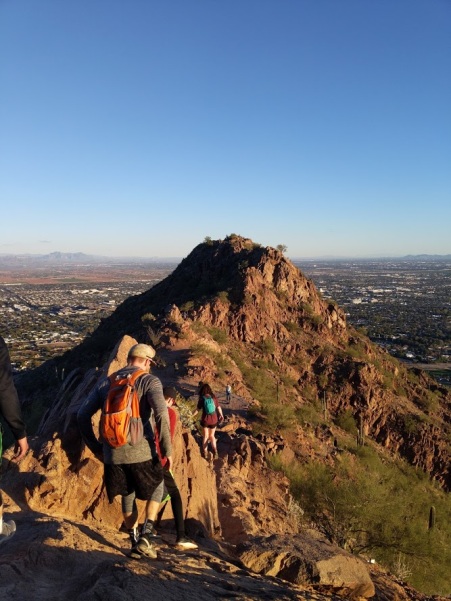 Soooo you can’t park at the trail head–you have to park on 64th street and walk up. If you’re lucky, you’ll get a spot near East Cholla Lane and you’ll have a 0.3 walk to the trail. If you’re Sheri and me, you’ll be .7 miles a way and you’ll have a mile walk to and from the trail head. On the plus side, there were quite a few Lime and Bird scooters laying around so you can use one if you’d like to take a scooter to your hike. Sheri kept suggesting Lyft, but ride sharing less than a mile to a 3 mile hike was beyond my capacity of acceptance.

Of the two urban hikes, this was my favorite. It was, what I thought at the time, a challenging hike. But I was young and naive then, and had no idea what challenging was. 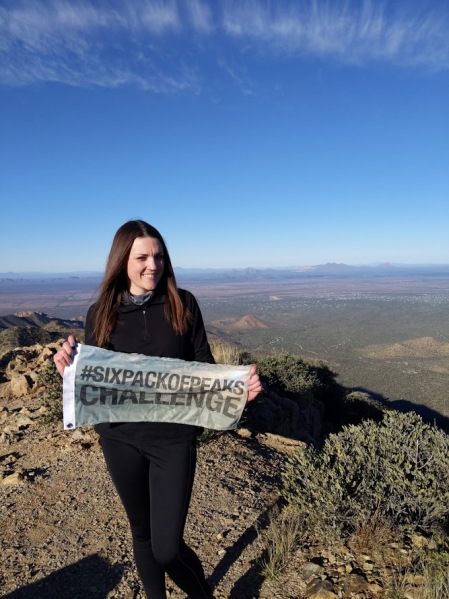 Wasson Peak was a nice reprieve from the crowds and steepness of the day before. The peak is located in Saguaro National Park. When we went it was during the #TrumpShutDown and when we went to turn off to the trail head the road was closed.

Determined not to let Trump ruin our hiking, Sheri and I basically became Galileo and navigated ourselves to the Sendero Esperanza trail head. While it added on about another mile (rt), we were able to take this easy going, meandering trail to the peak which lulled us into a false sense of security that “maybe this challenge won’t be so bad after all!’

Pro tip: the drive to the next peak has… not a whole lot of eating options. Unless you want to stop at the one McDonalds on the way or have gas station Subway, you should probably bring your lunch. 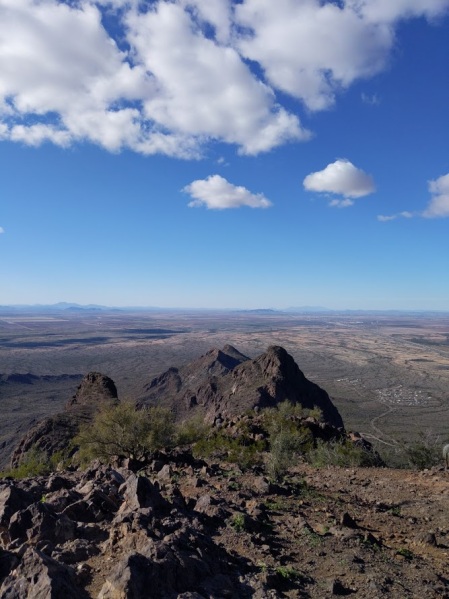 Imma be straight up with you when I say I’m not sure how this is a hike sanctioned by a state park. This is the most cuckoo bananas hike I’ve ever been on and I hiked Cactus to Clouds which is supreme cuckoo bananas. Sheri accompanied me about half way up before she tapped out due to height-a-phobia, so I completed it by myself.

She was the smart one here.

This hike involves vertical climbs where you cling to cables and regret every decision that you made that led to that moment in time. I felt like I was at the climbing gym but I didn’t have a harness or mats to save me from my inevitable plummet down the side of a cliff. This video does not really do it justice.

This was just one of the very many obstacles I had to climb solo. The only people nearby was the weird family that was ahead of me that gave me the creeps, and I was gonna be super bummed if they were the ones that found my body.

Once I made it up, I sat for a good 20 minutes knowing that the way down was going to be 1,000 times more terrifying than the way up. After a few deep breaths, I stood on my wobbly legs to make my way down. As I left the sanctity of the only flat part of that trail, was confronted by a family that had three women in BONNETS AND DRESSES huffing and puffing on their way up who looked at me as if to say “Suck it up, pant lady.”

I somehow made it down the trail without dying.

Pro tip: While I’d brought gloves, they were the thin kind you’d wear hiking in marginally cold weather. I highly recommend wearing work gloves as mine kept slipping down the cables I was desperately gripping to avoid my death. 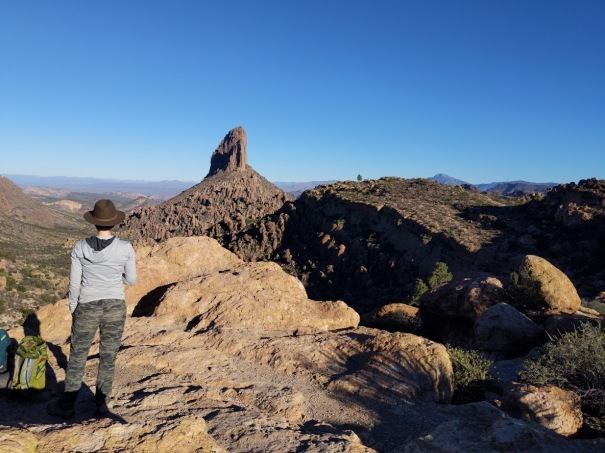 The day before we were to finish the challenge, my friends Tom and Kristal messaged me and told me they were planning on completing it, too. Tom offered to drive to the trail head, which I was stoked about because I was garsh darn tired of driving. I was less stoked that I ended up forgetting my hat in my car and had to buy a black sequined hat from a gas station. Why did I choose that hat? Because it was the best option.

Despite that, this hike ruled. It was nice, and gentle, and had a cave, and cool stories about the Lost Dutchman‘s treasure buried in them thar hills and it didn’t demand I stair step at all!

Unfortunately, Sheri’s knee became injured and this was the last hike she was able to complete. Although now that I think about it, maybe she knew what was coming… 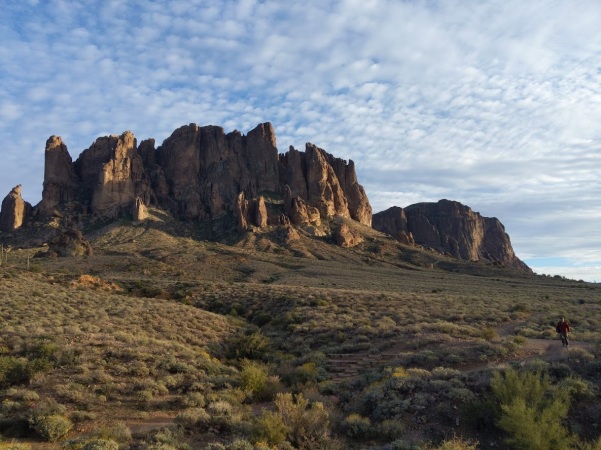 Flat Iron goes like this: an almost flat trail for a mile that then leads to a super steep slip and slide section and then class 2 scrambling for an hour and a half. The route up is both physically and mentally exhausting as it’s not so much a trail as you trying to figure out which rocks you might actually be able to climb if you can angle yourself a certain way and hold on for dear life. I recommend you use gloves for this hike as you will use your hands almost as often as your feet as you scowl at some brightly dressed trail runner hopping boulders and passing you with ease.

The “scary” part is known as the wall, a 10 ft vertical climb that is scarier going down than coming up. There is an alternative route off to the left that is marginally better and you can use it if you’re stuck behind a never ending stream of 10 year olds wearing Keds, or whatever version it is that kids wear these days that are inappropriate for such an excursion.

While Tom, Kristal and I were crab walking up and down rock slide city, Sheri lounged around ghost town that was a little bit down the road, drank a beer, watched a fake gun fight, and pursued the mineral shop for overpriced gems. We kind of hated her. We took solace in the fact that our view was probably better than hers. 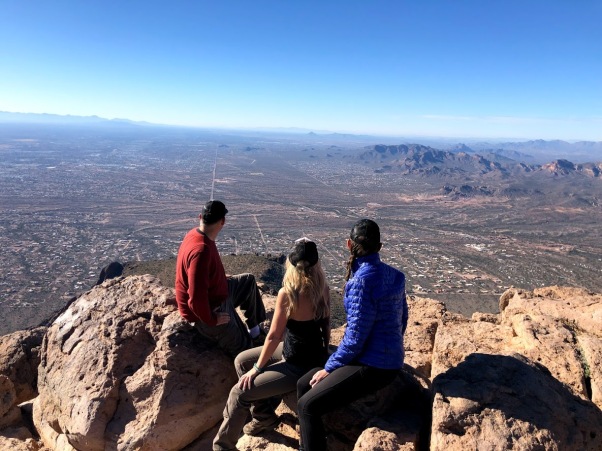 We finished with the hike around 4:45 for a total of about 5 hours for the climb. Sheri and I left Tom and Kristal who would continue the challenge with Wasson and Picacho the next day. I definitely think that getting Flat Iron out of the way on day one and finishing with the two urban hikes before heading home was the smart decision, and it’s one I would recommend if you can stay three nights instead of two.

If you’d like to sign up for the Arizona Six Pack of Peaks you can do so here. The challenge runs until April.