So there I am, thinking about how I need to knock out Baldy for this year’s Six Pack of Peaks Challenge, when I see good ol’ Lazy Ass Hiking post it as a moonlight hike.

Now, I’ve been up Baldy about a gazillion times, but never via Ski Hut, which seems to be everyone’s go-to. I’ve done both Register Ridge and Bear Canyon which are supposed to be the hardest trails ever, so how bad could Ski Hut be? In fact, I even invited my Boo @kylojenhikes to join, knowing full well that she hates steep peaks.

Oh, silly, silly Kristin, what did you do?

Start at the port-o-potties at Manker Flats and go up the fire road. A ways past the waterfall, you’ll see a steep trail to the left. This is also the trail you take to get to Register Ridge, which, by the way, you should never, ever do. 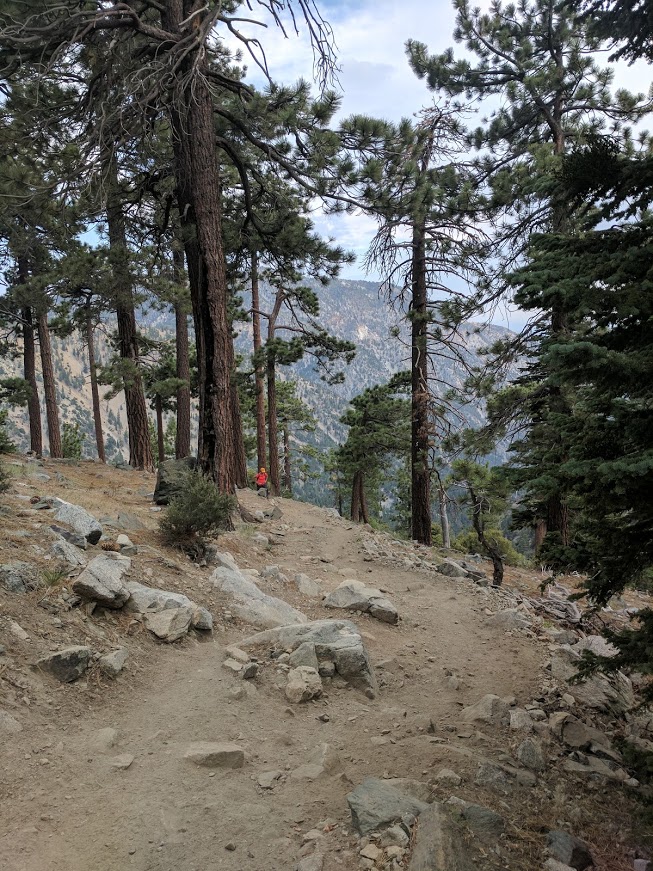 This part of the trail is the most scenic I’ve taken up Baldy. Throughout the trek on this first part you are able to see the green ski hut in the distance. It is also challenging, but not deadly. Once you get to the Ski Hut, however, things take a dark, dark turn.

I mean, yes, it was literally dark. So dark, that Boo and I got lost along the way. The trail was extremely steep, making frequent rest necessary, so Boo and I were way behind the pack. At one point I had to radio for help:

Kristin: Um, hi. I think we are lost.
Jack: Where are you?
Kristin: That’s a great question. Like I said, we’re lost.
Jack: …
Kristin: I’m sitting on a fallen tree and there’s a jagged rock over there?
Jack: Keep going to the left.

I don’t know how they knew where we were, but we were once again headed in the right direction. A couple of the guys ahead turned on their headlamps to guide us. Eventually we caught up with part of the group (and passed them) towards the final ascent where the trail seems to meander back and forth and you feel like you’re playing a long episode of that old school snake video game and you just know it’s going to end in you eating yourself at some point.

But progress, we did. “Push until you puke” as Boo said. And I almost did puke. But the best part about going through Lazy Ass Hiking is that have your friends waiting with wine and shots of fireball at the top!

After a bit of a break, we headed back down the less steep but murder-y sounding Devil’s backbone trail, which is actually the easiest trail and therefore the only one anyone should take.

Ski Hut was hard, man. I’m surprised that Boo is still talking to me, although we did get down to the Baldy Notch restaurant in time to take the ski lift down instead of walking another 2.5 miles to the car. This made us both very happy.

Less happy was that once we were in the parking lot, two drunk dudes started shouting at us to give them a ride down the mountain. We declined, and they got mad and asked us “What, you don’t like white guys?”

Yes. Clearly, because two women don’t want to be alone in the car with two drunk randos, we hate white guys.

One thought on “Moonlight Mt. Baldy via Ski Hut”